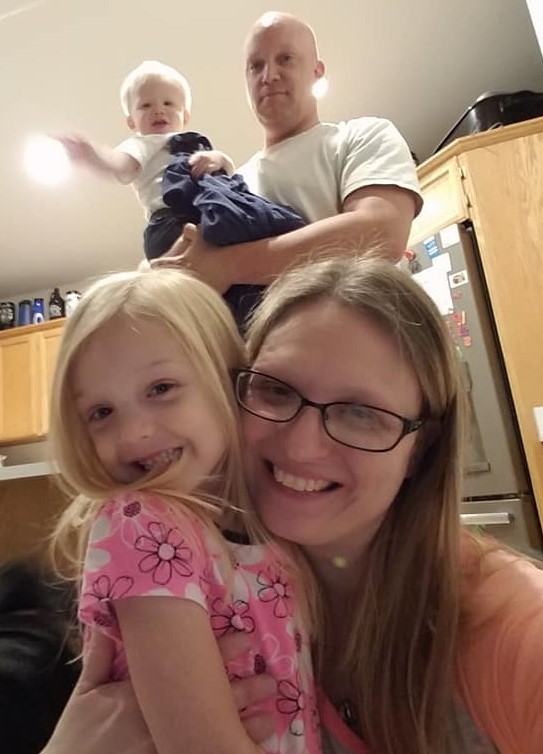 Shannon was born and raised in Baltimore, MD. It wasn’t until 1992 she moved to Florida, where she graduated from Eastern Florida State College in 2003 and became a CVT (Certified Veterinary Technician). In 2006, Shannon moved to Oregon and became a member of the CAC team. She and her husband Aaron were married in 2009 and together they have 2 children Emma and Logan, and 2 dogs Sadie and Dozer. The Walters Family is HUGE Oregon duck fans, and together they enjoy camping, hunting, and spending time with their family and friends. 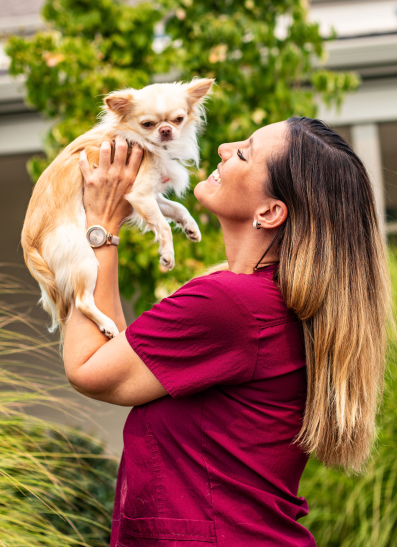 Ashley Graduated Pima Medical Institute in Seattle, WA with an associate’s degree in occupational sciences.
She has worked in the veterinary field for over thirteen years and has been a member of the CAC family for eight years now.

Amber came here to Crater Animal Clinic in January of 2021 after moving from Reno, Nevada. There she was a certified technician at a veterinary clinic specializing in our feline friends, she also has two of her own cats at home!

Amber enjoys the outdoors, dabbling in photography and fishing. 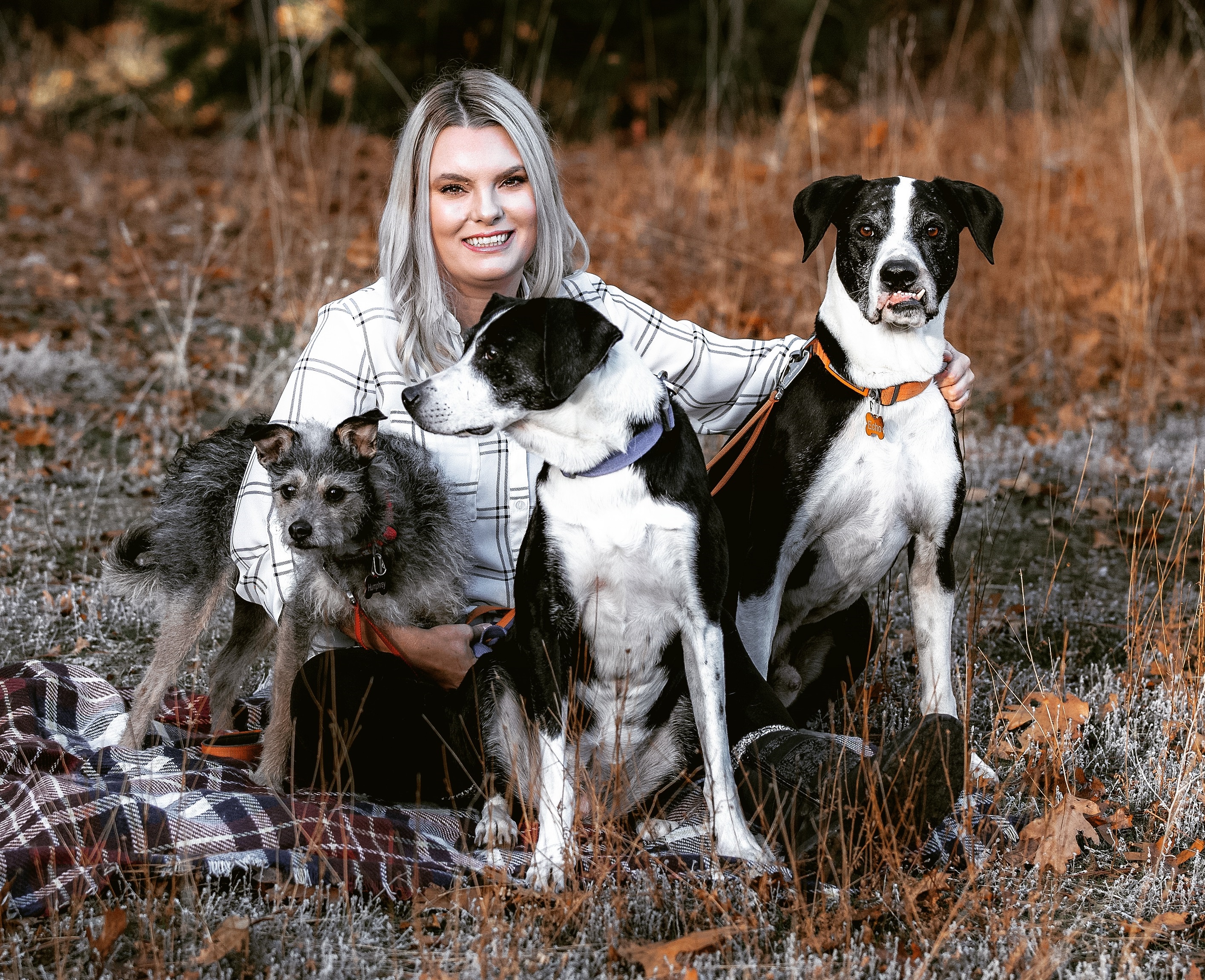 Silver joined the CAC team in the early spring of 2017 with a history of working in the veterinary field and the Humane Society. She attended Crater High School and SOU. Silver is currently taking online classes to become a CVT (Certified Veterinary Technician). She enjoys kayaking, camping, hockey (GO BLACKHAWKS!!) and going on adventures with her three rescue K9 fur babies Echo, Ashland and Humphrey and spending time at home with her feline rescue babies Julius and Token!! 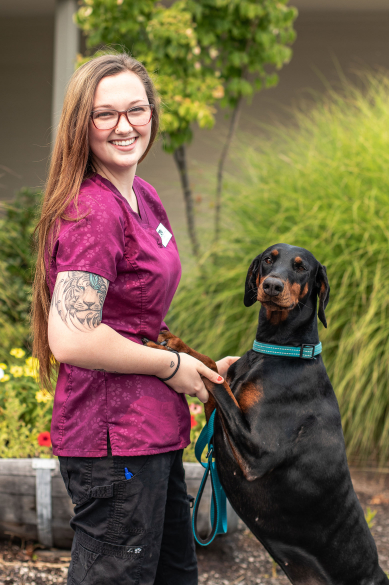 Kambrea joined the CAC team in early May of 2020. She was born and raised in Medford, Oregon and knew at a young age that animals were her passion. Kambrea is the youngest out of 6 siblings; she is the second to graduate high school, and the first to continue her education!! Kambrea has 1 dog: Sassy a rescued Doberman. Outside of caring for animals, Kambrea enjoys the outdoors, singing, ice skating, and a little bit of Netflix. If she’s not outside and its hockey season … you can find her up against the glass at a Spartans game!! (She does agree with Silver … GO BLACKHAWKS!!)

Cierra was born and raised in the Rogue Valley. She became a part of the Crater Animal Clinic team in September of 2020 as a large animal assistant, and has since moved to the small animal department as an assistant. From a young age, she knew she had a passion for animals and aspired to become a veterinarian. While she has made the decision not to become a veterinarian, her long-term goal is to become a CVT (Certified Veterinary Technician)!!

In her spare time, you can find her at the barn with her horse Huck or out on a walk with her dogs Atlas and Willow.

Caitlin started here at Crater Animal Clinic in 2016 as a small animal technician. She has since expanded her resume here at the clinic by assisting with ordering products, receiving and inventory. Caitlin and her family love the outdoors and especially wheeling with their 4-runner. 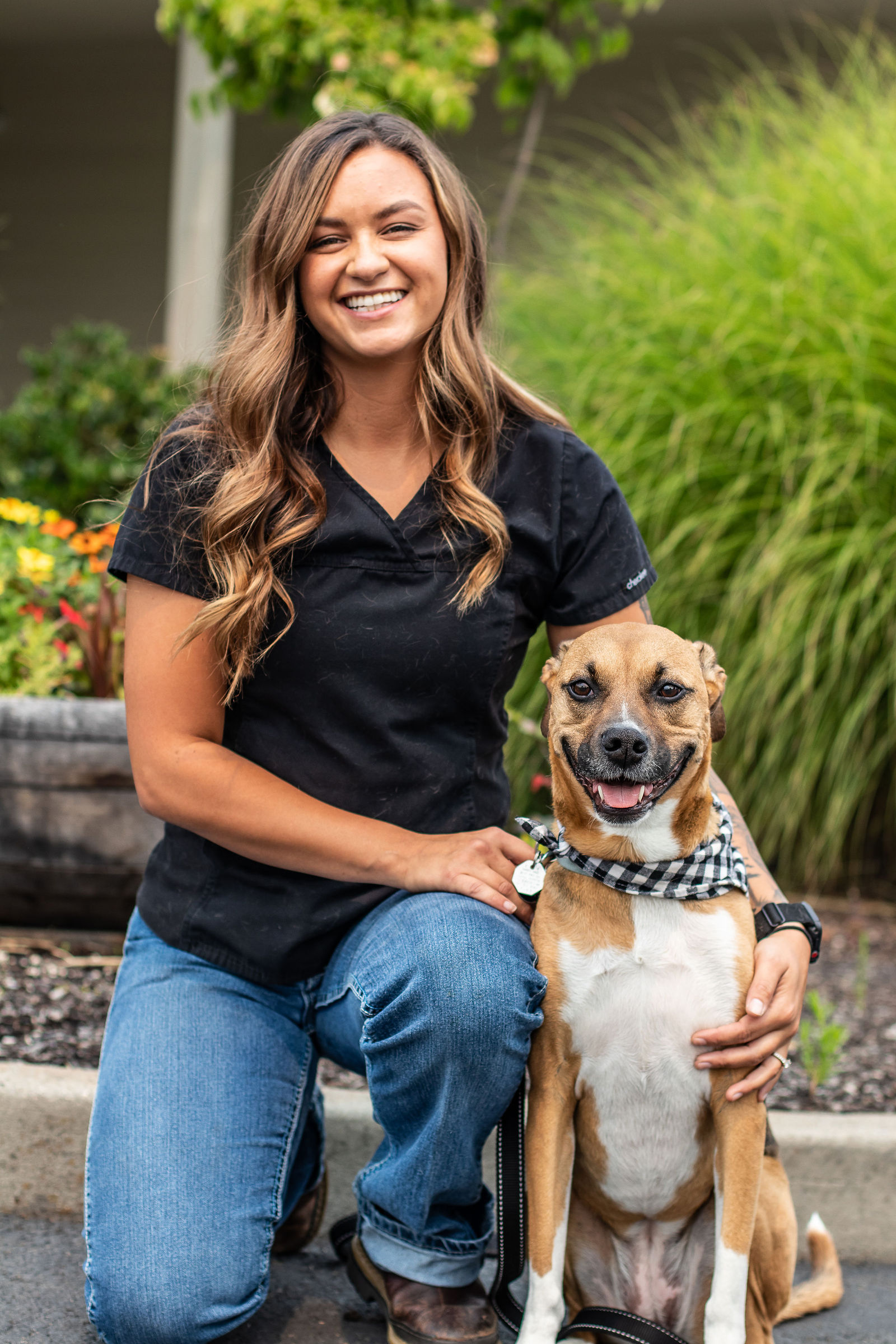 In the Spring of 2019 Crater acquired CeeCee to their team!! She grew up in the Rogue Valley and has always had a love for animals, in particular dogs. She began her veterinary assistant journey in 2015!! In 2018, she took a 3-month break and traveled a broad with her boyfriend Michael, to 12 different countries. CeeCee also plays women’s slow pitch softball with her friend and co-worker Joli!! She loves cuddling with her dogs and hopes one day to have her own farm. She enjoys comedy movies, sports, food, country music, and a night of karaoke. 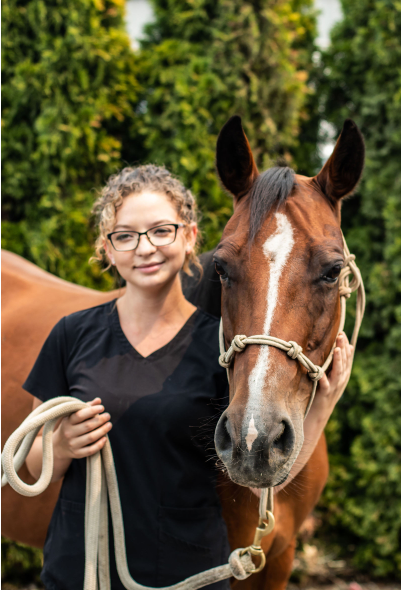 Michaela joined the large animal department in June 2018. She competed in Horse 4-H and OHSET during her high school years. After graduating from Butte Falls Charter School in 2013, she began training horses and starting colts at a facility in Ashland. During this time, she developed a passion for animal wellness and care, she pursued employment at Crater. In her spare time, Michaela enjoys barrel racing on her two horses Selena and Mayzi, as well as training dogs. She owns a dog (Zico) with titles in Schutzhund, Working Dogs of America and AKC Obedience/Scent Work. She also co-owns show dogs with her mom Meridith and can be found in the AKC Conformation Ring showing Black/Tan Coonhounds, Great Danes, and Australian Cattle Dogs.

Andrea was born in Portland but has lived most of her life in the Medford area. She received a bachelor’s in Biology from Southern Oregon University and joined the Crater team in October 2006. She enjoys the challenge and change in the veterinary field and loves learning new things. Her goal is to become a veterinarian and continue her learning. In her spare time, she loves reading. 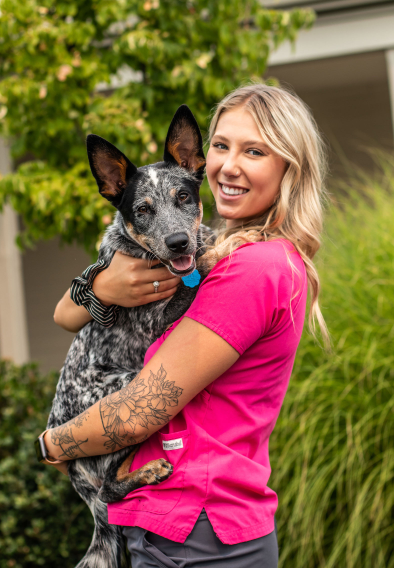 Jenna was born and raised in Medford, OR where she graduated from North Medford High in 2020. At the age of 19, Jenna found her passion … ANIMALS!! She has been with the CAC Team since the Spring of 2021 as a kennel technician, and has been in school to become a CVT (Certified Veterinary Technician)!! Jenna has 2 boxers, Beau and her rescue Roxy. In her free time, she enjoys fishing, being at the gym, rafting, and spending time with family and friends. 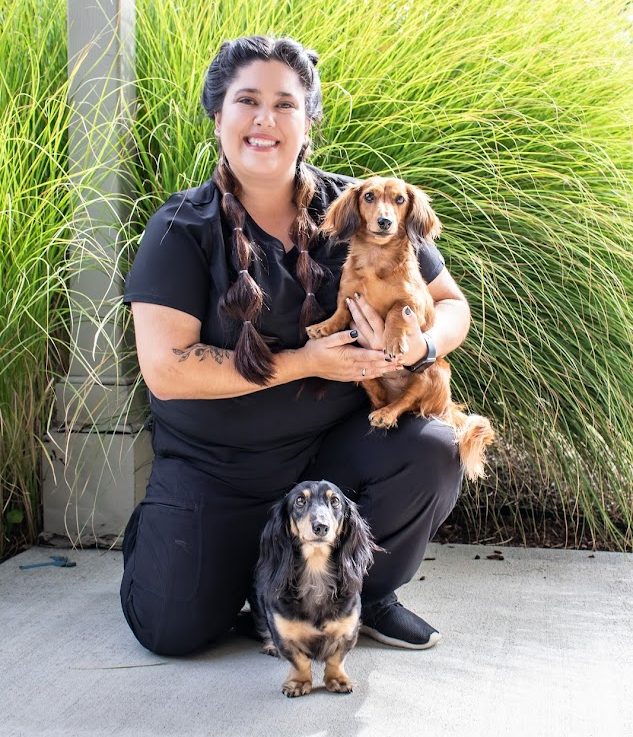 Joli was born and raised in the Rogue Valley, graduated from Butte Falls Charter School in 2013, and joined the Crater Animal Clinic Team in October of 2014. She was involved in the 4-H program for 9 years where she exhibited swine and horses. Joli has been playing softball since she was 4 years old and hasn’t missed a season!! She continues to play women’s slow pitch with her friend and co-worker CeeCee and co-ed slow pitch softball with her boyfriend Kyle. When you can’t find them out on the field, you can “catch” Joli and Kyle playing cornhole, bowling, or fishing. 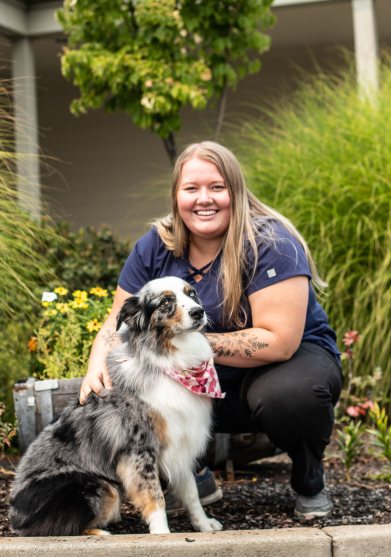 Karly began working for Crater Animal Clinic in October of 2020. She grew up in Lakeview, OR where she attended high school, played volleyball, and participated in the 4-H program raising sheep. Karly moved to Medford in July of 2020 for bigger and better opportunities. On the weekends, she enjoys visiting her family back home, spending time outdoors, and spoiling her dog Tawny!!

Shari has been the bookkeeper here at Crater Animal Clinic since March 2011. She has spent the last 20 years working with many small businesses both locally and in her hometown of San Jose, California. She moved to Southern Oregon in 2007 with her husband and daughter. She loves the outdoors and spends her leisure time camping, reading, paddle boarding, and practicing yoga. She is affectionately known at the clinic as, “The Money Fairy”. 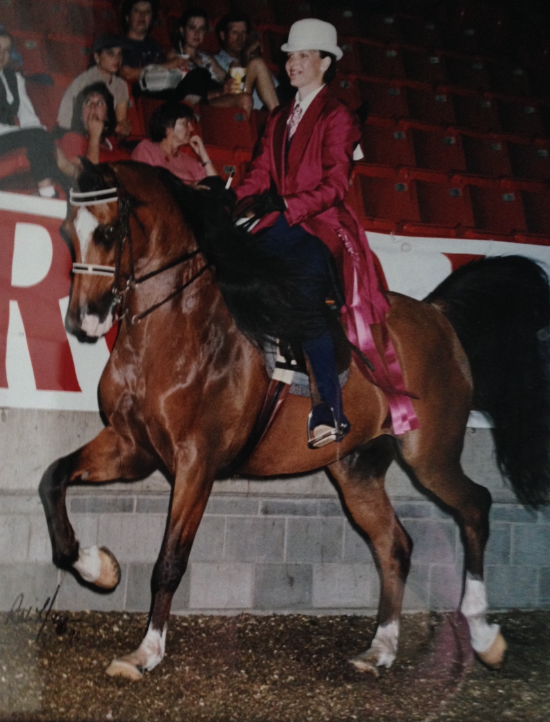 Diana was born and raised on a farm in the Rogue Valley and attended Crater High School. She has successfully show Arabian horses since the late ’70’s and enjoys showing English Setters as well. Diana has been working in the field of veterinary medicine since 1983 and joined the Crater Animal Clinic team in 2001.

Diana and her husband Sam have a son, Christian. She currently has two horses, one dog and three cats. Diana enjoys spending time hunting, camping and showing livestock with her family. She is also involved in the community with 4-H and FFA activities, especially with swine and sheep. 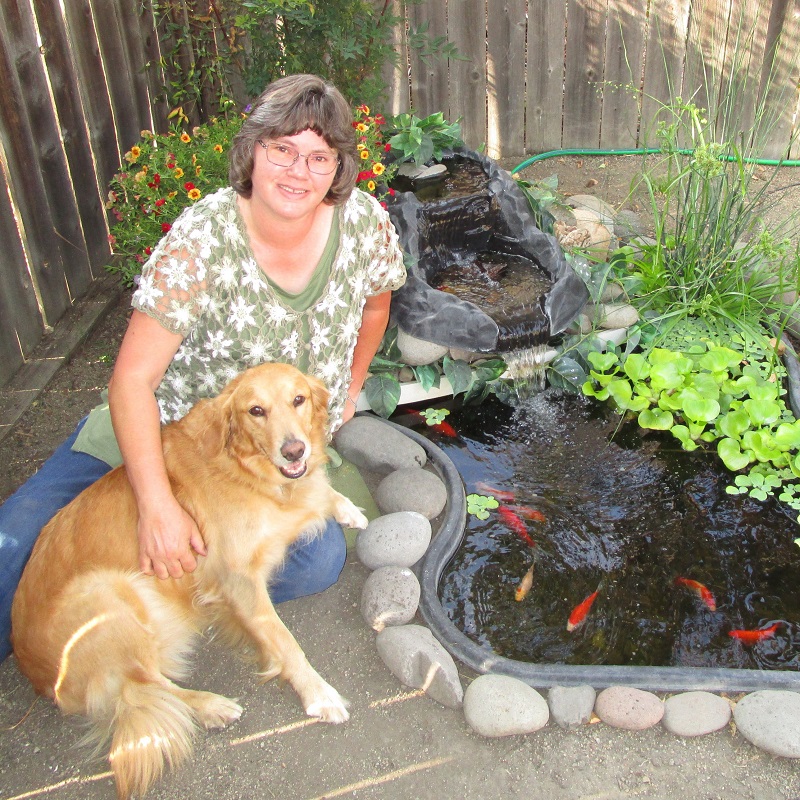 Lauralee joined the Crater Animal Clinic team in the Fall of 2013. Lauralee is a native Oregonian who grew up in Klamath Falls. She is a graduate of Crater High and Southern Oregon University. She has experience in animal health and dog training including rehabilitation and release of a bald eagle, golden eagle and red tail hawk while in Klamath Falls. Lauralee likes to go camping, hiking, boating and playing in the woods with her family. They have a golden retriever, cockatiel, gold fish pond and visits from the local wildlife.

We will do our best to accommodate your busy schedule. Contact us today!

Font Resize
Contrast
Accessibility by WAH
Call Us Text Us